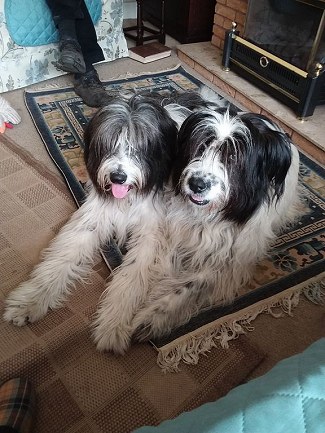 In 2017, we were looking for a companion for Eric, our Italian Spinone, as we had lost our German Wirehair, Archie, at the end of 2016. Eric was 12 years old, and still quite active. We searched some dog rescue sites, but without success.

After months of fruitless searching, someone who had a Romanian rescue dog (not Amicii) suggested we look on the Pets4Homes website, which we did, and found Amicii Dog Rescue. We saw Josie on the site, and applied to adopt her, subject to seeing her and meeting Eric. At the time she was fostered by Lesley Baker, and we went to see her in September. She was a lovely dog, with a placid temperament and had the most appealing eyes. So, we adopted Josie on October 5th, and took her home where she was at first wary of Eric. But unfortunately, Eric suddenly became ill, and we had to have him put to sleep the next day.

Although Josie was a little withdrawn and shy at first, she seemed to be happy. She met new doggy friends in nearby Warley Woods, and gradually became more confident. She didn’t play with other dogs, but just stood and watched as they ran around. It was a standing joke that Josie got tired from watching the others!

Lesley visited us in December, and noticed the change in her straightaway. We now looked for another dog as company for Josie, but with no luck, so during 2018, we decided to try fostering dogs for Amicii, and were asked to foster Jodie.

In November 2018, we picked up Jodie from kennels near Worcester. She was 5 months old, very timid and frightened, but soon began looking more confident, and within a few days was ruling the roost! She came on walks with Josie in Warley Woods, and met many of Josie’s doggy friends. She was settling well, and was adopted by a young couple just before Christmas. The house was empty without her. Her owners renamed her Pixie, and we have met again a few times on Amicii walks, and they have also visited us.

Had Jodie not been adopted, we would probably have adopted her ourselves, she was such a lovely dog. But then we spotted Maggie on the Amicii website. Maggie was fostered by Ann Pursey, and had a deformed front leg due to a dislocated elbow joint that had not been corrected. The leg was due to be amputated, but she underwent a course of hydrotherapy instead which strengthened her leg, and the elbow joint stabilised.

We went to Kempsey to meet Maggie just before Christmas 2018. We liked her, and she got on well with Josie, so we decided to adopt her. Ann brought her to us on New Years day, and she settled in well, although relations with our cats were rather fraught! She is very energetic and active despite her injury, and runs around as fast as most dogs in the Woods. She underwent another course of hydrotherapy at Bluewaters, and now her limp is only noticeable when she walks slowly – which isn’t very often! We continued hydrotherapy throughout the year, with a session every 6 weeks or couple of months, and she has her final session in December. Throughout the summer, Maggie has accompanied us to our allotment, and enjoys just lying on the grass by our bench watching and listening to everything going on.

She is also in behavioural training because of a tendency to leap at people (not dogs), and her behaviour has improved. Strangely, this is not a problem off the lead, but you can’t be too careful! She is poor on recall, but thankfully this is also improving.

Now Maggie knows us better, she is a sweet and affectionate dog, but one who knows her own mind! Maggie and Josie are very good together, and Maggie plays quite roughly with Josie, which has made Josie more proactive with other dogs. She also shows some dominance behaviour with Josie, which Josie seems to take in her stride. Fortunately, this does not extend to other dogs, and Maggie and Josie are now lifelong pals, well known and admired in our dog-walking community.

Throughout the adoption process for Josie and Maggie, Amicii have been so helpful, and we have met some lovely people. But best of all – we have two wonderful dogs!