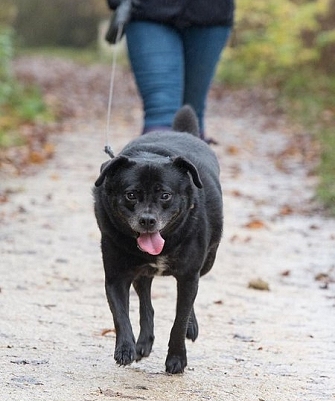 When I first met Siri in September 2017, he had been in the UK for just two days. He had been placed at the Halfway Home kennels near Lincoln. I had recently been through a bad breakup (although the thing I missed most about my relationship was my ex’s dog!) As a result, I went down to the kennels to see if I could help out by walking some dogs and therefore get my doggy fix!

The first and only dog I walked that day was Siri. The moment they brought this sweet, gentle boy out to me and we wandered round the nearby fields together, I realised I couldn’t leave him there! So I signed the adoption paperwork and I collected him the next day. It’s been me and him ever since!

I didn’t really know what to expect with a Romanian Rescue. I anticipated a long settling in period, I expected him to not be fully house-trained, and to lack training in other areas too. How wrong I was! Siri slept through the night in his own bed from the start, rarely barks, never chewed anything, has never messed in the house (except once when poorly) and has always behaved himself when it really matters. He loves chasing squirrels and cats, and spends lazy days following the sun around the garden.

He’s come out of his shell so much since those early days - he’s a real independent character and everyone who meets him, falls in love, just like I did.

What has been invaluable throughout has been the support offered by Amicii; even though I didn’t get Siri directly from them - the staff at Halfway Home gave me the Facebook details and I was able to join the Amicii community. When I’ve had any issues or queries because I’m a first time dog owner and it can sometimes be daunting, I’ve been able to reach out and get advice from more experienced owners and Amicii staff. This has meant I’m a far more confident dog owner than I would’ve been otherwise. It’s nice to know I’ve got that backup.

Thank you Amicii for bringing this brilliant little man into my life, I don’t know where I’d be without him.