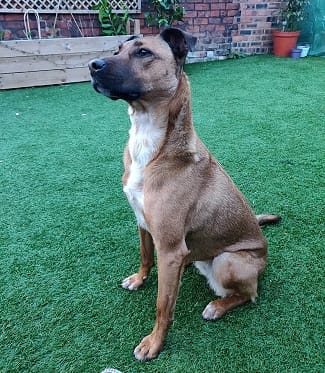 Willow was a pup (born Jan 2017 - now 3 years old) when she was taken into care at Amicii and was brought to the UK to Manchester Dogs Home. Willow unfortunately had two homes before us, with people not giving her long enough to settle. The first family had children and two small dogs and she was returned to the shelter 3 weeks later. She's now really not good with kids and used to be incredibly triggered by dogs on walks so we can only imagine what happened there. She's much better with dogs now, but she's still not good with kids, especially as there are no kids in our family for her to get used to.

The second home she was in worked incredibly long hours and she was on her own in a flat all day. She was then, again, returned 3 weeks later. So on top of the previous issues, she also struggled with severe separation anxiety and loneliness. She was not independent at all!

People often blame the shelter for not doing appropriate background checks on the potential guardians, but unfortunately Manchester dogs home, only a few years prior, had suffered a catastrophic fire on site and as they're a charity, are probably still relying on donations to provide such services like in depth home checks.

However, Willow has now been with us for 18 months and she is the love of our life. She's absolutely been a challenge, a LOT of sleepless nights and tears, four different behaviourists (which all turned out a waste of time because what's ultimately helped were our own ideas and instincts).

We've now found a lifestyle and routine that works for us and we've even welcomed a second Romanian Street Dog into our home. Lupin is from a different shelter and charity but is the chilled out, older, polar opposite to Willow and she's learning a lot from him.

Willow has gone from pulling up onto her back legs on the lead to walking with a loose lead at my side (we can deal with the occasional pull - she's part lurcher after all - she's FAST). She's gone from freezing and lying down when she sees a dog to having a quick look and moving on, and now even LIVING with another dog. She's gone from no training at all to being brilliant at obedience. She's gone from not being able to be alone whilst we go to the toilet to being alone for nearly four hours without howling and barking. We're so proud of her.

One piece of honest advice I would give to anyone thinking about adopting a rescue dog, is that if your mental health (and physical health to a certain extent) is anything less than perfect, you will have a MUCH harder job. I feel a sense of responsibility in saying this because I had a lot of hospital stuff going on in Willow's first year with us and I notice now that any time my mental health takes a dip, even if just for one day which is all it tends to be these days, she notices and reverts back to her own anxieties.

Adopting a rescue dog isn't just a nice idea that will make you look like a nice person to all your friends. It's a complete change to every aspect of your life. And like the two people who had Willow before us, the decision to adopt should not be taken lightly. We don't have our own children, but 90% of people I know who've had both dogs and children say that the dogs were harder work. You can do more things with your kids than with your dogs. Kids can eventually learn to communicate with you. Dogs can't. You can explain why you're asking a child to do something but you can't with a dog. A kid isn't a solid block of muscle full of teeth (well, kind of).

However, if you stick it out and you have the time, UNWAVERING determination and support around you, being the guardian of a rescue dog is the most deeply, spiritually, pure experience. It is the best thing a soul could ask for. Dogs are unlike anything you will ever experience, and dogs that have a difficult past are even more so.

We aren't a couple who own two dogs, we're a family of four.

Amy and Jim, Manchester, Guardians of Willow (Skye) and Lupin.